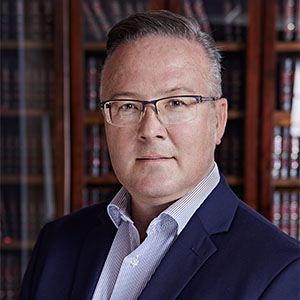 Louwrens has been in the legal profession for 25 years. He holds BCom (Law) and LLB degrees as well as a Masters degree in Labour Law. He was admitted as an attorney in February 1998 and is also an admitted (non-practising) solicitor of the Supreme Court of England and Wales for 19 years.

Louwrens was called to the bar during 2002 and was admitted as an advocate of the High Court of South Africa in December 2002. He became a member of the Bar in July 2003 and has since been a member of Group 21 for some 18 years. He is also an admitted and practising advocate of the High Court of Lesotho for the past 9 years, where he regularly appears.

While Louwrens has developed a particularly extensive practice in relation to employment law, his area of practice embodies a whole spectrum of commercial work available at the Bar. His practice focuses on commercial matters such as contractual disputes, pension fund disputes, shareholder disputes, disputes concerning directors’ fiduciary duties and liability, restraint of trade and unlawful competition.

Louwrens is frequently briefed by the full range of attorneys’ firms throughout South Africa, including the large general commercial firms and smaller firms with specialised practices. He has appeared in numerous reported judgments of substance, complexity and difficulty.

Louwrens strongly believes that the Bar must play an important role in the provision of access to justice and that doing pro bono work is a key way in which this can be achieved. In this regard, he has acted pro bono as a Judge in the Labour Court several occasions as well as in the High Court to assist with the Court roll which is extremely overburdened, in order to expedite access to justice to members of the public.

Louwrens is committed to the imperative of transforming the Bar so that it becomes an institution that properly reflects the demographics of our society. He regards the ongoing establishment and development of transformed groups within the Bar as imperative. He has been actively involved as a member of Group 21’s Transformation Committee and numerous transformation initiatives, including training and mentoring for several years. Louwrens initiated a Student Vacation Programme at Group 21 specifically for previously disadvantaged black students (predominantly female) at the University of Zululand more than 12 years ago that continues to run successfully each year. He has also been a guest lecturer at the University on several occasions over the years.