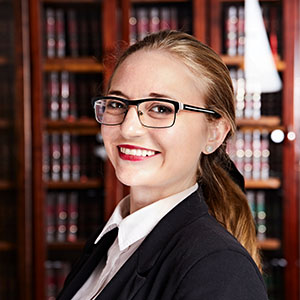 Petra joined the Bar in 2019. She has appeared in the High Courts in Johannesburg and Pretoria on behalf of private juristic corporate entities and individuals. She has a particular interest in administrative law, constitutional law, municipal law, contract, company law, insolvency, and criminal law.

In 2014-2015 she was a researcher at the University of Pretoria’s Institute for International and Comparative Law in Africa (ICLA). Petra subsequently served articles of clerkship and obtained extensive experience in civil as well as criminal litigation, while reading for her Master of Laws degree. She presented papers at no less than four international conferences during this time. She also completed a certificate course in Advanced Labour Law at the University of Pretoria.