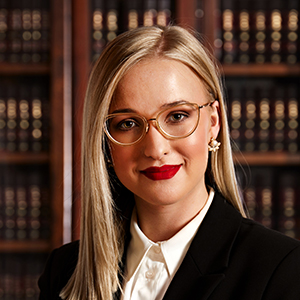 At the end of 2015, Rozanne joined a Johannesburg boutique law firm which specialises in general corporate and commercial law, immigration law, labour law and general litigation. After serving her articles of clerkship and being admitted as an Attorney of the High Court of South Africa in July 2018, Rozanne was retained as an Associate and later promoted to Senior Associate.

During her tenure as an Attorney, Rozanne gained valuable experience in various spheres of law including corporate and commercial law, law of contracts and delict, consumer law, labour law, matrimonial and family law, insolvency law, trust law, property law and, succession and estate planning law. Rozanne has litigated and appeared in a number of Magistrates’ Courts, High Courts, Labour Court, Labour Appeal Court as well as Special Courts and Forums.

Rozanne was converted from Attorney to Advocate in 2020, in accordance with the Legal Practice Act, 28 of 2014.